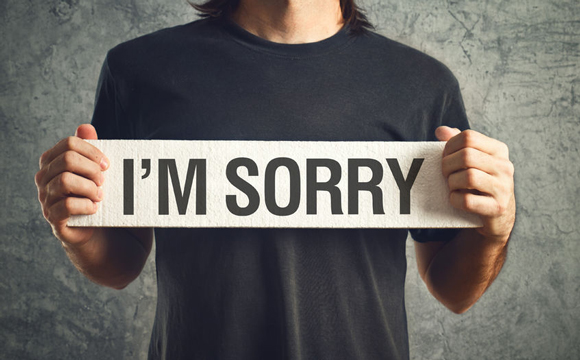 Why You Should Never Apologise

Apologising is pointless and reduces self-confidence.

Pretty big call, right? I mean, what kind of A-hole refuses to apologise?

Well, let’s start by defining what mean when we say “apology”. The Merrium-Webster online dictionary provides this definition:

A statement saying that you are sorry about something; an expression of regret for having done or said something wrong

An expression of regret for not being able to do something

When I researched this, I was immediately prompted to locate the definition of the word “sorry”, as that seems central to the concept of apologising. Yet that was no real help, because it just referenced sorry as being an “expression of regret”. So I looked up “regret”:

To feel sad or sorry about something that you did or did not do.

I was trapped in an endless loop. One thing I learned from looking for the definition of apology is that the reason WHY we should apologise cannot be found in its definition.

So let’s discuss it: why do we apologise?

Apparently, when we feel bad about something we have done or said, we should show regret for saying or doing that thing. I’d like to explore the benefits in this. Let’s see who wins or gains something when an apology takes place.

I think we can all agree that feelings of regret do not increase self-confidence. If anything, to have regret and be confident is a paradox.

When I looked up the definition of confidence, it appears to be the opposite of apology:

If apologising is about regret for doing things wrong, it would appear that confidence is about certainty that you are doing things right. They cancel each other out semantically, so by definition you cannot possibly experience confidence during a genuine apology.

But enough semantics, what is the point I’m making here?

Firstly, we apologise as part of social conditioning. Saying “sorry” is defined as a polite way of expressing regret. Emphasise polite. It is considered socially appropriate to say sorry when we are perceived to have done something wrong.

It appears our social conditioning emphasises that to do something wrong is regretful, and we should feel bad and less confident about ourselves when it occurs. We should politely express to those who have been affected by our wrongness that we feel regret and have become less confident.

Seriously, what is to be gained in this? Perhaps the person who has been wronged gains something from the apology. Let’s check it out:

Does it reverse the thing that was done wrong? No. You cannot travel backwards in time to change actions or their consequences.

Does it make anyone feel better (i.e. more confident) about the situation? No. The harm caused has still been caused, it cannot be undone.

Does it foster an environment of learning from our mistakes? No. It encourages shame around getting things wrong.

So the “victim” does not get restitution, does not feel any better, and has no idea if the offending party has learned anything from the incident. Hell, it could happen again any second. Looks like nobody wins from an apology!

It reduces confidence while strengthening the social construct that being wrong is bad and to be avoided.

Let’s be clear about a couple of things here:

Apologising is nothing more than expressing regret and shame about your actions.

And here’s the kicker: every time you apologise you are probably LYING.

And if, on the other hand, it was a mistake, then how can you regret it? For it to be a mistake means that you had no idea that you would cause what you caused. Therefore, there is no way you had any malicious intent. How can you “express regret” if there is no way you could have known a better way to do things? There was simply no other available outcome.

Maybe you’re trying to figure out why I’m making such a big deal out of this.

It’s because I see people who lack confidence apologising all the time. Every single day, low-confidence people express regret for their actions. Right or wrong, they apologise for being themselves.

Can someone please explain to me how this could ever possibly build confidence?

Every time you say “sorry” as an expression of regret, you are basically saying that you regret being yourself. Because YOU chose to take the action you took, which caused offence or pain, it is really YOU that you are expressing regret about.

When you apologise for a mistake, you are accepting regret for just being alive! You are saying “sorry” for interacting with the Universe in a way that correlated to offending or hurting someone, even though you had no idea it would turn out the way it did.

That’s a big responsibility – are you sure you’re so powerful that you can take responsibility for every single variable in the Universe? If so then your ego is even bigger than mine. And mine is pretty astronomical.

When you apologise, you are either expressing regret for being yourself, or you are lying. As I described in this older post here, lying is another way you destroy self-confidence, because it sends a message to your subconscious that your truth is wrong and bad. Hardly something that will raise your self-esteem, right?

What to do instead:

Acknowledge when you are wrong, and redeem yourself through positive actions.

This is not the same as apologising. This is about assessing the outcome and consequences of your actions, and deciding that you made a mistake. When you realise you have caused harm, the people involved don’t need you to feel ashamed. They just want recognition that they are not the ones who are wrong.

Think of it more as learning. Rather than feelings of regret and shame, make yourself become CURIOUS about your mistakes or intentional actions that led to harm.

You are NEVER wrong, however, when you offend someone. To claim responsibility for someone else feeling offended is grandiose and completely misguided. How can you possibly claim to be so omnipotently powerful as to have control over someone else’s mind? Are you psychic?

If you are feeling offended, there is only one person responsible: YOU. It’s your brain that creates the thoughts and feelings that makes you identify with “being offended”.

What you said or did may have triggered that process in someone, however there was something there to be triggered before you arrived. Someone cannot be offended without first having a set of beliefs to be offended about. You did not cause those beliefs, therefore you cannot claim ownership of their feelings of offence.

Your mission: do not apologise or say “sorry” for two weeks. Instead, when you are “wrong”, make up for it with valuable actions.