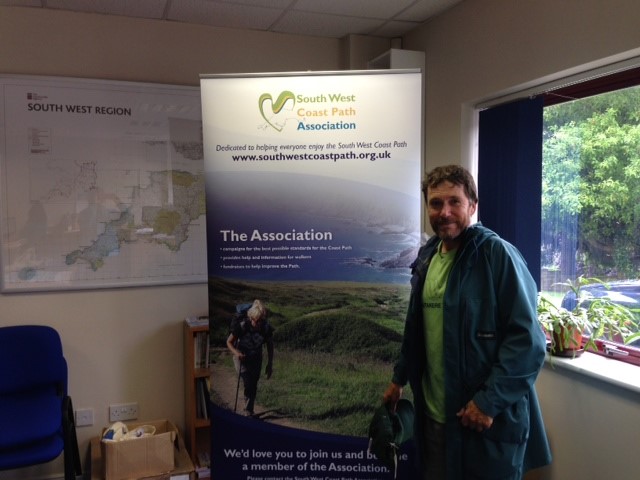 In April and May this year I walked the South West Coast Path in Britain, from Minehead to Poole, taking in such sights as Lands End, Durdle Door and Saint Michaels Mount.

To get an idea of the countryside, watch the videos Shout by Tears for Fears and The Living Years by Mike and the Mechanics, as well as the television programme Doc Martin and the Broadchurch series.

The tough part was starting.

At Minehead I had jetlag, a headache and I got a blister wandering around the town. My feet hardened up after a few days and it was really all about getting in the rhythm of walking, eating and sleeping. Walking is a great way of getting rid of jetlag.

I tried to practice mindfulness by being in the moment, enjoying each day, not thinking too far ahead. Just the next town, the next hill or the next step. Mindfulness is also about being non-judgmental and this extended to my camera – I only took one photograph, at the halfway point. I didn’t feel I had earned the right to take a picture of the start point, and at the end I just wanted to enjoy the moment.

I picked this walk because I originally was looking at the Camino de Santiago. But I was put off by the heat, crowds, and tales of 80% of the trail being along roads as well as people getting up at 4.30 am to rush to the next bed. Blame the movie The Way for this increased tourism. On my walk, some days I only saw two or three people, although some days were crowded. On the two Bank Holiday weekends, Easter and some normal weekends when the weather was good, and the locals flocked to the beach.

Still I traveled in relative isolation in between small and bigger towns. The most enjoyable parts were walking through small villages with narrow cobbled roads, hours of isolated walking on cliff tops, walking a few days with people I met going the same way at my pace, and meeting people in the hostels I stayed in. It was a challenging walk as it is in the open and you are exposed to weather conditions. I had five very hot days in a row and was exhausted at the end of each of these days after walking in the open all day.

Accommodation was generally plentiful with a mixture of youth hostels, private hostels, pubs as well as bed and breakfasts. The best time to travel is after Easter as a number of ferries do not start until then. March would be too cold and June too hot and crowded moving in to the school holidays. My guide-book I bought through Amazon, written by Paddy Dillon. It gave me a good daily map guide to the path that was easy to follow.

One of my friends simply asked “why?” when she heard of my plans to do the trip. I wanted to say something deep and meaningful but all I could come up with was:

“If you have to ask, whatever answer I give you will not satisfy you.”

As always after a trip like this the question is ‘what next?’ Well the New Zealand Masters Games are in Wanganui February 2015 and then the World Masters in Auckland in 2017 so those are my medium term goals.

Check out the website www.southwestcoastpath.com for further up to date information on track detours and accommodation.

‘A journey of a thousand miles begins with a single step.’

*Photo taken at the South West Coast Path shop in Ivybridge on completion to collect souvenirs as a nod to tourism, by the office staff who kindly emailed it to my home address.