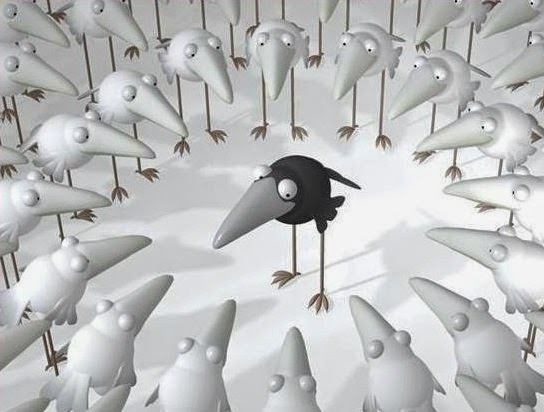 The Fear of Being Noticed

In most polls about fear, public speaking wins. Often it is listed as being feared more than death. What it is it about speaking in front of an audience that induces such terror?

After discussing with my clients I’ve found that public speaking is actually just representative of a more instinctive fear: social ostracism. Public speaking is a forum where we are technically at risk of being rejected by many people on a large scale. In theory, you could have a whole room of people hate you all at once.

Yet people who are afraid of public speaking can often also be perfectly comfortable in a crowd, provided they don’t have to speak or lead. So what’s the difference?

In a couple of sessions this month with my clients I’ve become aware of how fearful the concept of being noticed can be.

One of my clients was violently assaulted in his home on an almost daily basis for much of his childhood. This also caused him to be socially shy and reserved, leading to bullying. Like all children, he tried to establish a cause and effect explanation for his suffering. He unconsciously decided that being noticed was dangerous, and must be avoided. This led him to be an adult who panicked in the face of confrontation.

Another client had an awful incident happen during his adult years. He attended an event where he thought he would be surrounded by his friendly peers. However in a weird twist of mob mentality, the entire crowd turned against him for no reason and hounded him out of the event. There was even an implied threat of violence.

We are basically wired to fear ostracism, as we still have the same basic psychology we had back when being kicked out of the tribe was extremely dangerous. And in both cases above we can see that there was very real physical danger threatening my clients.

Yet the explanations your brain creates to determine which situations are dangerous can often be overkill. You’ll have noticed yourself do this. You experience a painful situation, and you analyse the situation to figure what you should avoid in the future. The brain, being a lazy beast, makes broad generalisations about what to be afraid of and needlessly discourages you from taking thousands of opportunities.

In talking with these clients I was prompted to realise that I had also been subjected to these situations in my own life:

For years I avoided displaying sexual attraction towards women after being ‘rejected’ by just a few insecure girls while I was in high school.

I tried to please other people consistently due to thinking that I had caused people to have bad moods when I was a child.

I spent most of my life over-achieving due to a couple of teachers making me feel embarrassed about ‘failures’ in school.

Think about your own upbringing. What massive conclusions have you drawn from small amounts of evidence? What fears have you created based on extraordinary and non-representative events? What have you missed out on because of these irrational and overly general fears?

In particular, how do you feel when you are being the centre of attention?

Think about the dreaded yet common and benign situation where you are asked to introduce yourself in a group setting.

It’s your first day at the new office and at the team meeting everyone goes around and tells you about themselves. As the others go around, your heart rate starts to speed up, your palms start sweating, and your mind races. You feel like an idiot, because the information is so simple, yet you’re panicking like you’re about to be asked to decide on international war initiatives.

Is it the fear of getting your name wrong, or sounding strange, or perhaps inadvertently offending someone? No, it’s the fact that you will be the focal point of attention for a group. This puts you at risk of the group teaming up against you and subjecting you to total ostracism.

Perhaps it’s more a case of your brain having been lazy when it was trying to assess risk and danger during a past experience. Particularly during childhood, when you had far less capacity for rational reasoning and critical thinking.

When left unchallenged, our childhood fears continue into adulthood, mutating and expanding to explain our adult experiences. Many of us remain on autopilot and are so uncomfortable with fear-based emotional sensations that we don’t even stop to question it.

What can we do about this?

Firstly, I once again have to emphasize the massively helpful potential that comes with journaling. If every day you revisit your actions and question the motivation behind them, you will be forced to face facts. The rationality of your actions can be questioned, which will increase one of the most powerful skills you can develop: self awareness.

Secondly, you can take the time to complete a simple exercise. Write down all the situations where you feel the fear of being noticed (any group situation that makes you uncomfortable is probably a good starting place). Next to each of these situations try to explain your justification for feeling fear. What harm do you face? How likely is this harm to take place? Exactly what consequences justify the fear?

This is not to invalidate your fear, merely to question the perceived cause of it. It’s OK to feel fear irrationally, as long as you don’t lie to yourself and pretend it is rational. There’s a lot of power in going “I’m afraid of this, and there is no logical reason for it, I’m simply still running on immature childhood programming”.

Lastly, and most importantly, challenge yourself to remain with the fear feeling longer than you usually do. Bathe in the feeling. When it’s your turn to talk in the team meeting, try being vulnerable. You could say something like “It’s funny, but while I was waiting for my turn to introduce myself, I felt really nervous. Anyone else get that?”

Try discussing this with your friends and trusted colleagues. Who else do you know gets nervous about being noticed, particularly by unknown strangers?