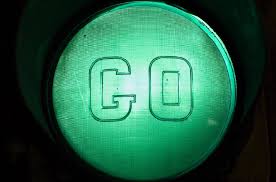 There’s an idea I’ve been floating around for a little while now called green light syndrome (I like to make up syndrome names because it makes me feel important and intelligent).

Green light syndrome is something that I’ve noticed in my own life quite a lot and I have started to see it in others.

Essentially, on the surface, what it looks like is a lack of initiation and leadership.

I once wrote an article why your boyfriend doesn’t initiate sex – it’s proven to be the most popular thing I’ve ever written – but as I looked into it what I saw was not that these guys didn’t want to have sex, which was the common misperception, it’s that they weren’t able to initiate. They weren’t able to take a risk, to request it, or get things going.

This is what I wanted to talk about today.

Green light syndrome is what happens when some people become so afraid of taking a risk that might end in some form of social disapproval or failure that they need to wait for what they perceive to be a green light, a welcome sign to move forward.

Essentially a “green light” is some sort of signal that they perceive as being a guarantee that they are not going to get rejected, or disapproved of, or punished in some way.

You’ll see this all the time perhaps in your own life.

For me, I wouldn’t start something unless I got some sort of recognition that I was probably going to do well in it, or that it was welcomed for me to do it. You can see this all the time in others. Let’s say if we talk about a guy initiating sex – he might be lying in bed next to a girl, he might be touching her in a kind of platonic way e.g. stroking her arm or whatever, and the girl’s sitting there thinking “Come on! Do something! Initiate!”

But what she doesn’t realize is this is him initiating!

What he’s doing now is he’s trying to provoke a signal. He doesn’t even realize he’s doing this, but he’s waiting for her to show some sort of sign for the girl that says “Yes, this is okay, I’m not going to charge you with rape after this, you can go for it.” He’s waiting for this very clear consent – blatant permission.

So many people are affected by this, not just sexually – that was just an example – but by this concept of needing permission before you make a move.

What I’d suggest is you have green light syndrome. You are just sitting there passively hoping for some sort of signal that it’s okay to move forward, that moving forward is going to be low risk for you.

To overcome green light syndrome you simply need to start taking risks. You need to accept that you don’t know how things are going to go and there is no way to answer that question until you make a move.

One way to address this, as I talk about this in my book Nothing to Lose, is the concept of collecting No’s. I got this idea from prosperous coach Rich Litvin. Essentially what you do is you seek to engage in situations where you are certain of failure – at least in your mind.

You go in and you request things that you believe you’re definitely going to be rejected for, and you start pushing yourself to go and deliberately fail.

Now you can notice right now a number of areas in your life where you feel if you were to move forward you’re definitely going to fail, if you were to go for a certain thing there’s no chance of success.

I say choose five of those things and by the end of the week go and do them! Deliberately fail. Choose things you have absolutely no chance of succeeding with, just to show yourself that you can do something without permission and without a guarantee.

This is a practice that you can build up over time – deliberately seeking out something that you’re going to fail in.

There’s two reasons for this: one, is because sometimes you’re not going to fail. You just think you are. You look at the thing and you think “That’s impossible.” There are so many times I’ve had people do that. I’ll be working with one my clients and he’s all like “I couldn’t ask this girl, out she’s just so far out of my league, and blah blah blah – all this judgemental stuff. So I’ll be like “Go get rejected by her then, go get it out of the way so you can sleep at night, so you’ve got some peace of mind.”

And so often they’ll come back in a daze like “Fuck she said yes! I don’t know what to do!”

They are as so sure that it was going to be a rejection that it blows their minds. They go in so sure of failure that they aren’t attached to success, which is actually something that really helps with success.

I challenge you to go out there and fail go out, and challenge this permission thing, and remember the old saying:

“It’s better to ask for forgiveness than for permission”