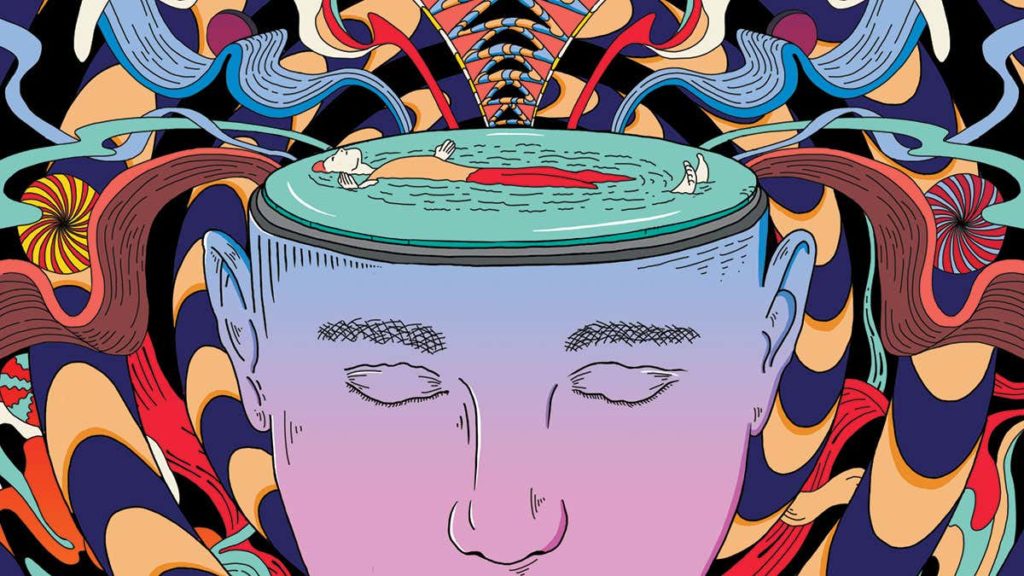 “I am trapped inside a locked room, having a dream about being a person”

From what we currently know through the field of neuroscience is that the mind is a result of activity in the brain. Signals from the ‘outside world’ are interpreted by various senses in the body, which are then relayed to different parts of the brain. These parts then interpret the signals, like a computer decoding binary signals from a USB drive, and translate them into sights, sounds, and sensations that are projected into that mysterious space we call conscious awareness, like a computer playing a complex video based only on bytes of data.

With me so far? Good.

Another way to explain this, as demonstrated by neuroscientist Anil Seth, is that your brain hallucinates your reality. It turns signals from ‘outside’ itself into a kind of interactive movie that it plays inside your head. You, as the observer of this movie, feel as if you’re simultaneously the main actor and the director. You interact inside the reality as a character while also directing this character from somewhere behind the scenes, sending hidden messages and instructions to the character that none of the other actors can see or hear. You see the movie on the screen of your consciousness, hardly aware that the projector is hidden behind you, beaming out this image from your subconscious. You have no idea of what is happening in the projector booth, you can only see the movie and hope that it somewhat accurately represents reality.

Brain in a Vat

There is a classic mental experiment known as the brain in the vat. It claims that if you kept a human brain in a vat of life-sustaining liquid and then wired it to a computer that was advanced to the point where it could stimulate the sensors in the brain to create a false reality, the brain would have no idea that what it was experiencing wasn’t real. The brain would think of itself as a person living a normal life and never would it realise that it was just an organ in a jar.

You can never know if you’re ‘real’ or simply plugged into a simulation. Technology is rapidly evolving to the point where we actually could do this experiment in real life, so who’s to say this technology has not already been perfected and you are a test subject? Certain futurists and technology gurus like Elon Musk already suspect that we’re living in a simulation. You’ll never, ever know for certain that what you’re experiencing is real, because you’ll always feel that it is even if it isn’t.

In fact, you can be sure that it’s not real. At least, not exactly.

The first and only time I tried a hallucinogen was when I split a tab of acid with my friend and settled down to watch The Lion King for a fun time. For the first 30 minutes, nothing happened, but then something caught my eye. The stand-alone speakers next to the television began throbbing, the circles of the speakers expanded and collapsed repeatedly as if they were breathing. Then the floral pattern on the coach started to run, as if it were an oil painting that someone had just sprayed with solvent. Later, when I was very unwillingly and terrifyingly dragged to a large, loud party, a tree outside the house started glowing like each branch possessed an energy source. I was simultaneously able to notice that these hallucinations were merely a consequence of the drug yet also believe they were true. I couldn’t not believe that what I was seeing wasn’t real even though I knew on some level that it wasn’t.

Everything you believe is based on trusting your brain to synthesize and accurately interpret an unimaginable amount of data every minute. We are so hard-wired to believe our brains that even when we can rationally surmise that what we’re seeing isn’t ‘real’ we still believe it is. When you see a magician do sleight of hand, you know it’s just an illusion, and yet you feel shocked at his ability to make the coin disappear. You can’t convince yourself that it isn’t real unless you actually see him make an error with the trick. If he pulls it off flawlessly, you have no choice but to believe your brain – at least at an emotional level – when it says, “Oh my god, that’s impossible, it must be real magic!”

As you read the words I’ve written here, you’ll ‘hear’ them speaking in your head, or a kind of mental picture will form to recognise the pattern of symbols (letters) as coherent ideas and examples. Just look at this word:

Suddenly, it’s meaningless – just a confusing mess of symbols – even though you rationally know that it’s made of the same symbols as the word DISASTER. Despite rationally knowing the truth, it’s no longer able to be interpreted by your brain as anything of significance. So the question becomes: what’s the difference between DISASTER! and SstIDrEA? Why does the pattern arrangement so completely determine how ‘real’ it is?

The word disaster seems real while the other word doesn’t. Your brain turned a grouping of symbols into feelings and ideas when they’re arranged in a certain way, but rearranging them completely breaks the illusion of meaning. Compare this to thinking there’s an intruder in your bedroom, yet when you flick on the light you realise it was just shadows from the trees outside your window. Now, once the light is turned off again, you get no further sense of an intruder and can clearly see the shadows for what they are. What happened to the intruder? Did he leave, or did he never exist in the first place? Do the shadows even exist, or are they yet another illusion? If you can’t trust your original assessment of the shadows, then perhaps you shouldn’t trust your updated interpretation either.

Or, as they say in The Matrix: “There is no spoon”.

Can We Trust Our Subconscious?

You already know that you can misinterpret data consciously – like accidentally believing tree-shadows are an axe-murderer come to get you – but what about subconscious interpretation? What is happening at the level of the brain that you cannot see? You’ll never know.

The fascinating conundrum within fields of study like psychology and neuroscience is that the brain is studying itself! Hardly an unbiased observer. We wouldn’t trust a fraud investigation if it were done by the defendant who is accused of stealing the money, so why would we trust the brain studying itself? In fact, this dilemma applies to all fields of study. If indeed we are living in the Matrix, then anything we study is not real and therefore all of our findings are false. We cannot see outside the room in which we are trapped, so we study what’s in the room without knowing if the room is real or imagined.

This might all be a tad uncomfortable to observe; it certainly was for me. The first time I was made aware of this stuff I needed a long lie-down afterward. I started to realise that me feeling convinced is not proof of anything at all. Believing is not a reliable measure of reality. I have observed myself being simultaneously certain and wrong.

There is one particular incident that haunts my mind, reminding myself of the untrustworthy nature of reality, and more specifically, human memory. My sense of being a real person who has lived a life is entirely dependent on my faith in the validity of my memories. But what if memory cannot be trusted either?

I was once at a party when I was a young kid, maybe 8 or 9 years of age. It was a Christmas party for adults, the kind that children are dragged along to and start dying from boredom after just 10 minutes in. However, there was a plethora of snacks to choose from, so I decided to curtail my boredom with comfort binge-eating (a pattern that would follow me throughout my life). I spied a particular delight: a bowl of chocolate-covered almonds. As a kid with strict parents who didn’t allow me to eat sweets, this was a temptation too good to resist. I knew that I had to act fast, because for some reason my parents hadn’t yet realised that I had access to this forbidden treasure.

Quick as a flash, I reached out and grabbed a massive handful of the chocolates and jammed them into my mouth like a squirrel hoarding acorns. After the first bite, however, I realised I had grievously erred. They were not chocolate-covered almonds, they were in fact one of my greatest enemies: fresh olives. I have an unusual hypersensitivity to tastes and textures (a fancy way of saying that I’m a fussy eater to an extreme degree). I immediately projectile-vomited about a dozen half-chewed olives onto the recently vacuumed carpet. My parents hadn’t stopped me eating them because they’d known all along what they were.

So, at this point you’re probably thinking this is a fairly mundane childhood experience that I’ve jazzed up a bit with creative writing that is irrelevant to the discussion. But the plot is about to thicken. What is truly amazing about this event is that my younger brother, Matthew, is absolutely convinced that he is the one who ate and then spewed up the big mouthful of olives.

We’ve argued about this at length, and the only thing we know for certain is that we are each equally sure that the other is wrong about who ate the olives. Both Matt and I each have clear memories of being the one who ate the olives, yet there’s no way both of us did this simultaneously. What’s even more concerning is the possibility that neither of us ate any olives. Maybe we both saw a scene like this in a movie when we were younger and imagined ourselves as the character so vividly that we created identical false memories. At this point, I can’t even be sure that we attended a Christmas party at all!

Is It OK To Know Nothing At All?

This is the most fundamental understanding of wisdom first described by Socrates (as reported by Plato): the only thing we know for certain is that we know nothing for certain.

There is no way to verify reality, because one would need to stand outside reality to observe it. Not only is this impossible by definition, as reality is all we can ever know, we can be fairly certain that we are hallucinating our so-called reality, interacting with an existence that doesn’t exist in any objective sense, it’s just a movie played inside our mind. However, this is no reason to feel bummed out and weird.

Neuroscientist and author Sam Harris once quipped that when he looks at his daughter, he doesn’t think “this clump of atoms is giving rise to ‘cuteness’ in my conscious awareness”. Harris can simultaneously understand the dilemma of perception without being overwhelmed by it. Like a video-gamer learning to accept the limitations and rules of the game he’s playing, one can understand that reality is limited by perception and still have fun playing.

So continue to work with reality as you know it so that you may function, yet hold onto it only lightly, knowing for certain the only thing you know for certain: it’s not real.