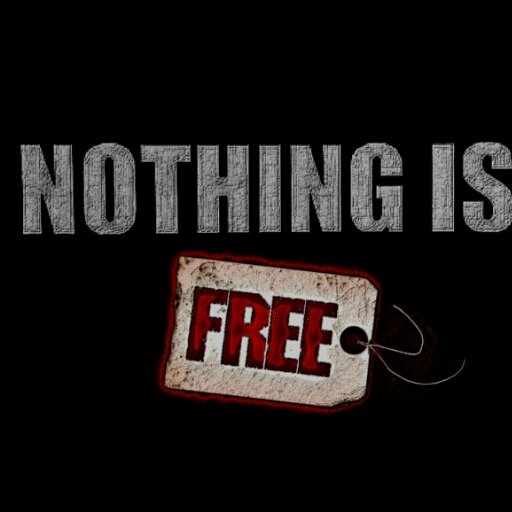 Nothing Comes for Free

Many people want the good things in life for free.

We want a loving, connected, sexed-up relationship, but without hassles, arguments, and heartache.

We want a high-paid, exciting and fulfilling career, but without tax problems, gossipy colleagues, and fluctuating finances.

We want to be honest and courageous, but without being confronted, rejected or hated.

We love the benefits that come from certain pursuits, goals, values and talents, but we hate to pay for them.

I believe this inability to accept that we must pay for the good things in life – and keep paying – is killing us.

Everywhere I look, people are frustrated and disappointed by unmet expectations. We cry and bitch about life being unfair, we fall apart when there are too many hardships in a row, and we drown in confusion over the delay in gratification for our good deeds.

We’re sitting around waiting for our hand-out and assume that at some point we won’t have to endure pain any more. We feel like we’ve paid enough and it’s time for return on investment.

THE ILLUSION OF ADVANTAGE

Take a minute to step back and look at your strengths. Notice how nothing was free.

I used to play a geeky game when I was about 10 years old. I can’t remember what it was called, but it was one of those Lord of the Rings style things with orcs and crap.

You could be a wizard, an elf, a dwarf, or a warrior. Each one had different strengths. If you were the wizard, you’d be able to use magic but you’d get your arse smashed in a physical fight, whereas if you were the warrior you’d be strong but slow and stupid.

I always thought this was a pretty good representation of the genetic hands we are all dealt.

Being born academically intelligent might look like an advantage, but it comes with the price of increased rates of depression, pressure to succeed, social struggles, and higher likelihood of being forced through the entire outdated and soul-destroying education system.

Being good-looking might seem worthy of envy, but you’re more likely to become obsessed and worried about your appearance, struggle to find genuine connections amidst all the sycophants, and distrust someone’s interest in you.

Being emotionally empathetic might make it easier to connect with people, but it also opens you up for higher likelihood of being manipulated, unhelpful levels of emotional sensitivity, and increased worry about what others think.

Even comfortable demographic starting points – like being born into wealth – miss out on other crucial longer-term benefits. Resilience and grit can only come from suffering. The spoilt, beautiful, rich bourgeoise become psychologically fragile, lacking the inner power that comes from surviving abuse, ostracism and trauma.

But I know the grass looks greener.

I know it’s difficult to believe that the Have’s suffer as much as the Have Not’s. I know that despite plenty of evidence that the rich, clever, beautiful and famous elite still suffer emotionally, we struggle to believe that people born with an advantage aren’t pain-free.

THE DOWNSIDE TO WINNING

Chronically single people often beat themselves up for not finding a partner, eventually coming to believe that this will solve all their problems.

Yet they must conveniently overlook evidence of couples bitterly fighting over money, cheating, the exasperation of living with someone in your face 24-7, and all the other headaches you don’t worry about when you’re single.

Bored married people get jealous of the singles. Yet they’ve forgotten. They’ve forgotten about spending most nights without someone to hold. About the massive sexual dry-spells. About feeling like no-one has your back. About getting sick of the dating scene. About hassles from peers and parents.

People stuck in a dead-end job dream of owning their own business. They believe they can travel the world with a laptop, only working 20 hours per week and living large on passive income.

They don’t see the true entrepreneurs, working 90+ hours per week, losing their friends and family, gaining weight, constantly stressed about money, and plagued by never-ending doubts about their abilities. Even the millionaires become neurotically obsessed with money and distrusting of even close friends.

Entrepreneurs sometimes think of going back to the grind. But they forget the agony of commutes in traffic jams, asshole bosses, and feeling like a prisoner.

Someone who is overweight might get jealous looking at the active, confident gym-bunny. But what about the strict diet plan? What about pushing yourself on machines until you want to vomit? What about the increase in self-consciousness about your appearance?

CHOOSING A GOOD PROBLEM TO HAVE

As Mark Manson talks about in his book The Subtle Art of Not Giving a Fuck, improving your quality of life is about choosing better problems to have.

Let go of the idea that there is a problem-free, easy option with tonnes of rewards. Assume every option is equal reward and payment.

You need to decide on more than just the criteria of reward; you also need to recognize and accept the payment.

And that the payment is never completed – you rent your rewards.

The cost of single freedom is isolation, especially when your friends start getting married and having kids. The cost of a loving marriage is boring routine and having to consider someone else in everything you do.

The cost of a safe job is following rules you don’t like and making money for someone else. The cost of passion-based entrepreneurial pursuits is financial insecurity and constant battles with motivation.

The cost of a healthy body is strict routine, hard exercise, and boring meals. The cost of a comfortable sedentary lifestyle is lethargy, increased illness, and feeling unattractive.

No option is objectively better than any other.

These examples are just fictions I made up too, there are problems and benefits to each that I haven’t even thought of.

Rather than trying to pursue a perfect life, start thinking about what you’re willing to pay, and if what you want is too expensive for you.

What problems do you want to have?