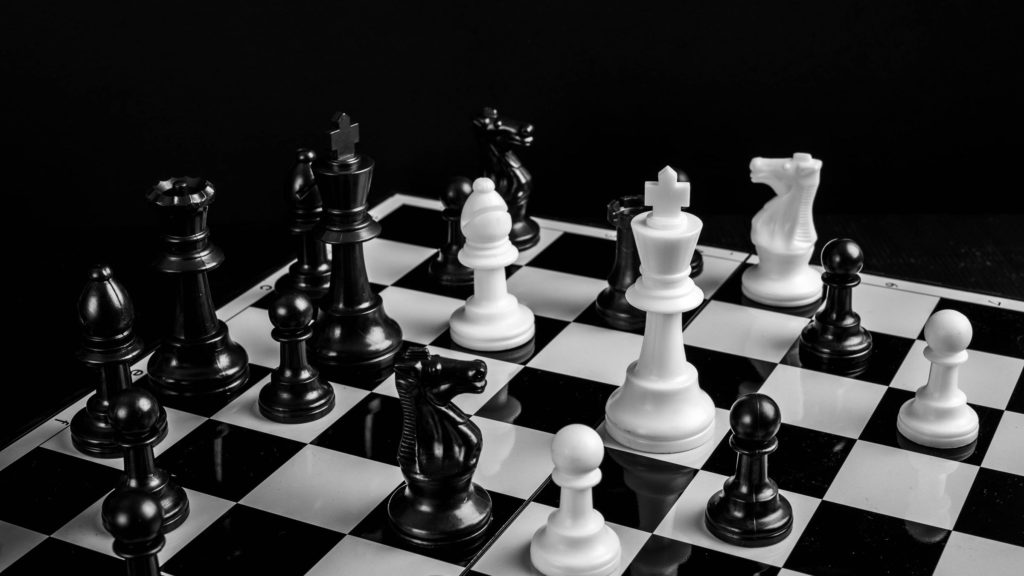 life is a game of chess

My latest obsession is playing chess. It’s good for the brain, competitive (allowing me to keep my confrontational emotions sharp), and well-suited to the permanent lockdown environment of COVID-ravaged Czechia.
The more I play… and lose… the more I see that chess is really a metaphor for life. So many of the principles and experiences I’ve encountered in this game are really just life lessons.
So I thought I’d share a few with you all, because, you know, what the hell else am I going to do?

I often lose in chess because I have a tendency to forget that the other dude is trying to win as well.
Entropy is working against you. Whatever plan you might have, understand that the universe is actively working against it. Don’t be bitter when you encounter resistance and setbacks, because these ARE life.

Don’t bring your Queen out too soon

My seemingly favourite thing to do in chess is lose my queen early and fuck up my chances of winning, all because I’m overexcited about bringing out the big guns early.
Conserve your energy for important matters. Instead of wasting your bandwidth arguing with some idiot on Facebook, take a time out instead and connect better with your child when they come home from school.

When I go for a quick checkmate, I usually end up just falling into the other guy’s trap.
Quick-fix overnight successes are rare and often faked. A huge percentage of the time, success is achieved by thousands of small courageous actions consistently taken over many years. Be patient and consistent – it’s more effective than talent and style.

Have a plan you’re prepared to change

Sometimes I’ll see that the other guy has laid out countermoves to my strategy, but I just doggedly stick with it anyway.
People who too rigidly stick to a plan are easily upset and eventually fail; while people without any plan are left floating around without the benefit of compound gains. The most successful people have a flexible plan that they adjust to feedback from experience.

Do not block your bishops

I’m a sucker for making attacking moves that look tough in the short term but actually just disable my stronger pieces and exclude them from the game.
Allow your strengths room to move. If you’re an artist in an engineering job, or an athlete stuck behind a desk, or a wise person staying quiet out of fear of rejection, you’re wasting your strengths.

In chess, if your piece is doomed and definitely going to die in the next move no matter what, you make sure it goes down swinging, taking out one of their guys before it’s eliminated.
Whatever you’re attempting, make sure you go to absolute failure rather than giving up early (e.g. someone ejecting from an awkward conversation rather than letting the other person end it). You’ll learn a lot more in the final 10% than any of the rest, and you’ll even occasionally turn it around in the last minute.

When I watch the pro’s play, I can see what chess looks like when it’s done right. I always learn something.
You will not reinvent the wheel. Almost everything you want to learn has already been figured out by others before you.
Learn the fundamentals that others have discovered before you start making stuff up.

When it’s not your move, look for opportunities

The best way to use time in chess is to move quickly and then make your plans while the other guy is thinking, so you use his time for your strategy rather than your own.
Whenever life forces you to stay still and wait, e.g. being stuck in a job due to COVID, use this time to look for potential future improvements and move toward them. Be prepared to quickly exploit an opening.

View the whole board, not just one sector

The easiest way to take someone’s rooks is to make them focus on the other side of the board with “decoy” threats.
Many people get tunnel-vision in their life, looking only at the short-term future or getting obsessed with only one aspect of their life. Take time every week to step back and review your entire life and forecast it’s long-term trajectory.

If you’re not willing to lose a few pieces, you’ll lose the game

Refusing to sacrifice pieces in chess is a short path to losing.
Like a comet shedding pieces as it hurtles across space, you’ll need to let go of previous attachments to grow. This might mean losing a job, friendships, comfortable home environment, or even your diet. If it no longer serves you, lose it. You must get uncomfortable to move forward in life. Playing too safe – such as sticking with a “guaranteed paycheck” at a job you dislike – ends up becoming a threat over time (e.g. you eventually become too expensive for the company to retain and are made redundant).

Sometimes, sacrificing your Queen is the best move

If a win requires me to sacrifice my queen early, I’ll usually chicken out and miss the opportunity.
Often, the things we’re most attached to become our masters. What was initially valuable enslaves us, to the point where it becomes hurtful. Sometimes moving to a new country or ditching your old friend circle is the best move forward.

Most games start with book openings, but will eventually become totally unique

The first 5 or so moves should usually be patterns some expert made up. You don’t start playing chess creatively until after the opening (unless you enjoy losing). As a beginner, you won’t invent some novel new opening that no one in 500 years of chess hasn’t already explored.
Whether it’s starting a conversation, a new business, a hobby or pretty much anything else, most beginnings follow a similar pathway for everyone. Usually, you can do the basic starting moves the same as the experts, but then be prepared to go your own way.

The best chess players are prepared to go to end-game

Most new chess players get frustrated at the slowness of their progress, and just want to get good quick. This leads them to strive for early checkmates rather than playing through to “endgame” (only a few pieces remaining for each player).
A rule of thumb I recommend for new coaches I’m training: be prepared for this to take up to 5 years before it becomes solid. People generally give up in the middle of a process and miss out on the end. When it’s getting really hard and frustrating, always remember: this is probably the middle, it’s not the end-game.

Analyse your losses, not your wins

When I win at chess, it’s usually because the other guy made more mistakes than me. When I lose, it’s because I made the worst errors.
When something goes well you can learn from it, but nowhere near as much as learning from things that don’t. When journalling, spend extra time assessing those moments where you failed to live by your values or anything else. Learn from your mistakes rather than trying to stretch out the afterglow of lucky successes.

I often find myself in the position of having lost a game due to making silly mistakes and yet still have 5mins left on the clock. I rushed like I was running out of time because I was impatient to win.
If you’re rushing, you’re doing it wrong. There is really no reason a confident person who’s on top of their life would ever rush. So before giving into the impulse to move urgently, stop and ask yourself why you’ve ended up in this position.

The first few moves in chess – when played by a grandmaster – are usually accomplished within seconds. This is because a game doesn’t really get interesting and real until after the opening, which is often just by the book.
Get started rather than overthinking. Whatever it is you’re attempting, you’ll figure out what you need to do once you’re into it, so getting started is far better than guessing how it might go before you’ve even started. Get messy and then clean it up.

Play to win but move on quickly from losses

I lose more than I win in chess, but strangely this has made it more enjoyable for me. I try to win but don’t expect to, so losses are just business as usual rather than some confidence-breaking disaster.
Sure, success is nice and we should aim for it to ensure best overall wellbeing, but ultimately you’re going to lose far more than you win (unless you play safe and comfortable which leads to total loss anyway). So go hard, take your hits, and move onto the next attempt. Dwelling on losses is pointless.

The main mistake I make in chess is getting so excited attacking the other person that I forget to defend myself.
Serve yourself first. This is not selfishness, because everyone else benefits from you taking care of yourself more than they benefit from self-sacrifice.
Remember, if you can’t function, you don’t have a life and those around you will suffer too.