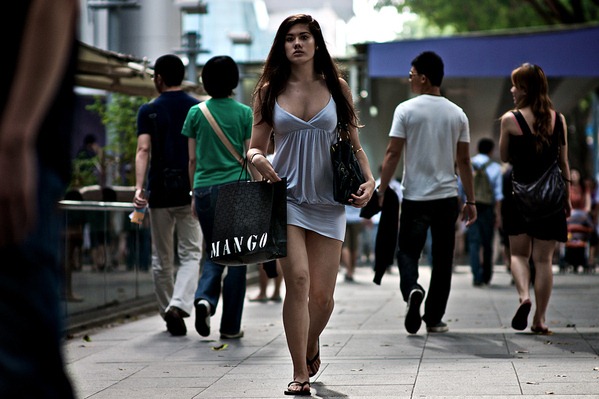 How To Conquer Approach Anxiety

Approach anxiety is probably the most common problem for guys trying to improve their dating lives.

Most guys learn about “game”, about the different methods of talking to women, and about approaching. But then when it comes to actually going out and approaching real people, they get hung up on it.

We guys fear all sorts of irrational things, and the anxiety gets the better of us. We concoct an assortment of crazy, worst-case scenarios about what could go wrong if we approach a woman and it doesn’t go well.

“Maybe she will yell at me and embarrass the hell out of me.”

“Maybe her boyfriend will come out of nowhere and slug me.”

“Maybe she’ll call the cops and say I was harassing her.”

“Maybe a meteorite will be flying into the exact position on the earth where I will be standing when I approach her, and blow me into a million pieces, effectively ending my existence!”

All of these things are of course completely ridiculous (especially the last one).

But these are some of the things that go through the minds of many guys when they are thinking about going up and talking to a woman they don’t know. They fear everything and they let these fears take over.

The best piece of advice I’ve ever been given regarding this matter is to “just go for it.” Embrace the moment and the fear and completely own it! I like to use an analogy that I think fits great in this particular situation. I call it...

When I was younger I used to absolutely despise going to the fair, carnival, or theme park because of the roller coasters that all my friends wanted to go on all the time. I hated them and was completely terrified of them. I always used to think that I was going to die on one of them, and going on them made me sick every single time!

The feeling in my stomach, you know, the butterflies, upside-down, queasy feeling, that people get from time to time when something scary happens, was the absolute worst for me. Anytime I was ever riding one of these things I was praying to God that it would end!

For years and years I avoided going to carnivals and parks just to avoid having to ride a roller coaster. This lasted many years, until one spectacular day…

I reluctantly went to Six Flags with a daredevil buddy of mine, one summer day a few years back. The day leading up to going to the park, I was very nervous, but self-assured that I would not be going on any roller coasters or even many other rides. I had told my friend that I would go there only to hang out and maybe play some games or go on a couple of the less-threatening rides. Little did I know just how much he would be bugging me and trying to make me go on a ride when we got there. Had I known this I never would have gone in the first place…but now I’m glad I did.

After much convincing/begging/bribing I grudgingly decided to go on a roller coaster with him. And not just any roller coaster, THE Roller Coaster! The Bizarro one, the deadliest of all roller coasters; the one that goes like 80mph and has a hundred or so foot drop! I thought I would expire when I went on it. Literally, I thought it was the end for me.

I was terrified when we went on it and I was ready to throw up and keel over as soon as we sat down. But I noticed that my buddy was acting completely opposite from me. He was yelling and screaming and putting his hands up and bouncing up and down in his seat. I thought “What an idiot! I can’t believe he convinced me to do this! How dumb am I for listening to this guy?” But then he must have read my mind or sensed the internal insults directed at him from my head, because he said “You have to pump yourself up when you go on these things!” And then told me to do what he was doing because it was so much more fun that way.

Normally I would have said “You are a moron”, and just ignored him, but that day, for whatever reason, I decided to partake. And I started doing the same things he was doing: yelling, shouting, putting my hands up, and moving around like a nut. And then we took off…

For a second I went back to being scared and terrified and almost hiding in the corner of my seat, trying my best to avoid the sensations that this ride induces. But then, filled with fear again (and having nothing to lose), I decided to do what he was doing, which was still yelling and screaming and going crazy!

I went against my gut instinct at this point and began acting like a mad-man possessed. I put my hands up, screamed, embraced the sensations given off by the roller coaster and…

I discovered the secret to riding roller coasters that day and actually overcoming pretty much any fear that you have for that matter: by embracing them! By embracing the fears and tackling them head-on, you live in the moment and you are able to overcome the anxieties and terrors that ordinarily come to you.

So by yelling and screaming and putting my hands up in the air, I was embracing the fear and not letting it due what it usually does: terrify people. I was taking hold of its power and empowering myself in the process!

This same roller coaster concept can easily be applied to approaching women. When guys ordinarily get that feeling of anxiety, just before an approach, what they need to do is accept it. They need to accept it, and then embrace it, and use that energy (from fear and anxiety) and turn it into excitement! They can actually use it to their advantage and make their approaches more lively and animated.

So next time you get anxious over approaching a woman, remember to “just go for it.” You need to instantly go for it, and take hold of your fears. By reacting as soon as possible, you don’t allow the anxiety to build up, but instead shut it down and quickly turn it into something useful like good energy!

Go out now and conquer your fears!

If you want to build massive social balls this year, get yourself a FREE Confident Mindset Inner Circle series here