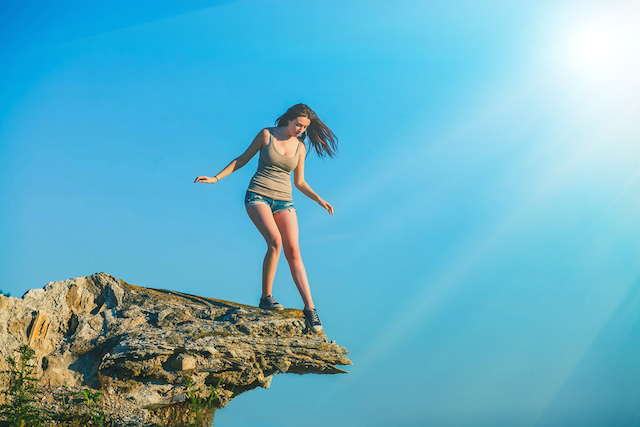 Facing Fear: It Does Not Stop You

At the Brojo Confident Mindset last night we had an epic discussion about the nature of fear. We initially called the session Overcoming Fear but in reality it became more about harnessing and facing fear.

How often do you blame fear for your lack of action? Think of a time when you wanted to behave in a certain way, particularly to do something that would have made you feel proud of yourself, and yet you think that fear prevented you from doing it.

How did you feel afterwards? Full of regret? It’s interesting that we are capable of going through a process where we

a) choose not to act according to our core values,

b) blame the reason for this lack of action on fear, and then

c) feel terrible about ourselves for making this decision.

Odds are you get angry at yourself for being afraid because you think fear is an almost uncontrollably external force, preventing you from being the person you wish you were. This is how we attach shame to fear; we get afraid and then tell ourselves that it’s wrong to be afraid.

We humans have a program in our brains that helps us to deal with guilt. It’s called backwards rationalization. Essentially neuroscience research shows us that decisions are actually made subconsciously and emotionally, and a few seconds later we become consciously aware of them (after they’ve already been decided). We then make up a story – a ‘rationale’ – as to why we made the decision, which from a personal perspective makes us ‘feel’ like we are making a conscious decision.

What stories do you tell yourself to explain your lack of action? Here are some great examples that came up during the Brojo session:

I can’t stand up to my boss because I’ll get fired..

I can’t approach and talk to that girl I find attractive because all her friends are there and I’ll be humiliated..

There’s no point in going to the gym because I’m not seeing the progress I want to see..

You’ll have plenty of your own no doubt. And this post isn’t about questioning whether or not these stories are true. It’s about looking at how we use these stories to turn ourselves into helpless victims.

All of these rationalization stories have a common theme: they describe a predicted scenario rather than a real one. They are made up stories. Yet we treat these as if they are 100% truth, and therefore not open to being challenged. On top of that we also see these made up consequences as unmanageable; we think that they are beyond our ability to handle and therefore we cannot face them.

At Brojo Confident Mindset we had a roundtable discussion as to what fear actually was, and broke it down into its separate parts. Here’s what we got:

– Hypersensitive awareness about how we are being perceived

– Testicle shrinkage (hmm… this one is probably male-specific)

– Concern that something unusual is taking place

There’s something important missing from this list. Can you see what it is? The title of this post is “Fear does not stop you”, and the answer to what’s missing relates to this.

What’s absent from the list is “being forced to behave in a specific way”. No matter how many of these fear symptoms you experience, none of them actually control your behaviour. Unless you pass out or have a heart attack from fear, you are still able to decide what actions to take. The list above are all just sensations; they are not orders or instructions.

Fear does not decide for you!

So when we say fear does not stop you, what we are really saying is that your decision to not experience more fear is what really stops you. Yes, fear makes you uncomfortable and yes, it gives you a massive temptation to flee, but the final decision about what action you will take is a separate process.

Fear causes you to backwards rationalize, which leads you to make up a story about fictional consequences which you want to avoid, like getting fired, rejected, or even physically injured. You then decide to not explore this any further, and you choose comfort over feeling fear.

That is what stops you. Fear is your scapegoat for cowardly decision-making. What we’re really talking about here is the value of courage.

No matter how much fear you ‘overcome’ there will be more waiting for you around the corner. As one of the bro’s put it last night:

What he was saying is that all you can ever really do is unlock new levels of courage. There are a few extremely rare psychological disorders that create ‘fearlessness’ in humans. The people who are afflicted with these often get physically harmed and end up in trouble with the law.

So there is actually no such thing as fearlessness. I hate the word fearless and how it’s used by people in the self-development industry (yes I’m guilty of this in the past too). It’s such a load of shit. If you were truly fearless you would by definition be insane.

Courage is about using the power of anger, frustration and a helpful version of guilt, to override the impulse to retreat to your comfort zone. Courage is the force that allows you to act in spite of any fearful sensations you are experiencing.

Defusion can help you reduce the impact of these sensations (for more on this technique check this out my video on finding reality), but in the end you will still have to feel some of them to face a situation that scares you. Courage is the decision to experience fearful sensations for longer than you want to.

Cowardice is the decision to prioritize comfort over personal growth.

So next time you want to back out of a situation due to feeling fear, try being honest with yourself. Instead of rationalizing it by saying “I can’t because…” try facing the truth and saying “I’m choosing to be comfortable, instead of pushing my boundaries in order to grow”.

Why do we need to be honest with ourselves in this way? Because this is what will build the helpfully courageous sensations of frustration and guilt. We like to think we are motivated by pleasure, but in reality we are motivated by the desire to avoid suffering.

Fear is at its core a drive towards remaining comfortable. It’s really no more complicated than that. Unfortunately this is often unhelpful in the longer term as it creates future suffering.

When we avoid painful fear in order to be comfortable now we create more pain in the future. Check out my article on authenticity for more on this.

To intervene and prevent this miserable pattern from playing out, one of the most powerful things you can do is to bring the guilt forward to the present moment. Usually, you’ll make a decision to be comfortable and then feel bad about your decision later on, when it’s too late to do anything about it. But when you bring guilt into the present moment you can still choose to be courageous before the opportunity passes you by.

A simple question you can ask yourself, when you notice the rationalization process starting to happen in reaction to fear, is “How will I feel about my decision tomorrow?”

Take yourself to a place mentally that predicts how you will feel looking back on what you are about to do. Will you be glad you backed out? Will you feel proud of yourself? Or will you lie awake thinking “If only I had…”?

By facing this in the moment you will start to generate frustration. You will see that this pattern keeps happening and that it creates misery in your life, like regret, remorse and dissatisfaction with who you are. Once enough frustration builds you will feel a strong powerful override-sensation. This is one of the most addictive sensations you can experience; it’s known as the feeling of COURAGE.

Being courageous serves as a powerful method for building unbreakable self-confidence. When you see yourself taking risks for the sake of being brave you will start to admire yourself more than you envy others! It won’t even matter if the situation “doesn’t work out” in your favour, because you’ll feel so proud of yourself just for making the attempt.

So get out there and get scared. Bathe in fear and use this fantastic opportunity to grow superior levels of confidence and satisfaction. Use anger to help you be courageous, and create a better life for yourself, instead of choosing to be a cowardly victim.