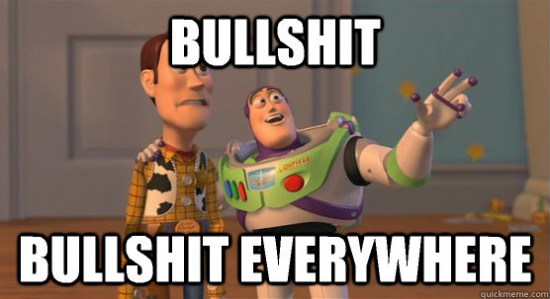 Everyone is Full of Shit

Thanks to the internet, we are the generation who gets to see a full, unmoderated view of how full of shit everyone is. Sometimes it beggars belief how insecure, irrational and just plain misinformed a majority of the world seems to be.

It’s a big deal. Most of who ‘you’ are gets created through the influence of others. There is no such thing as objective independence. As soon as you come into contact with another human, they affect you. This cannot be prevented.

Your brain is absorbing information at a rate that you cannot comprehend. You have no conscious choice about what it decides to take on board, or what it tries to ignore. Your cognitive biases are like subconscious filters; directing the traffic flow of information into different parts of the brain for storage, use or deletion. You only become aware of information after your brain has already absorbed it.

With things like Facebook and a proliferation of ‘news’ media, we are now saturated in the ideas of others. Once upon a time you would only be affected by those in close proximity to you, like your village elders, family and friends. These days you are constantly soaking in the opinions, ideas and manipulation techniques of millions from all around the world.

The reason I’m focusing on this point initially is because I want you to take a moment to think how this affects those close to you. Your most trusted advisors, friends and influences are all subject to this mass exposure of globally viral bullshit. They cannot help but be influenced by it themselves, just like you.

And they’re the ones telling you how to live your life.

When was the last time you went to someone for advice and they actually said something like “To be honest, I haven’t done nearly enough research or experimentation relating to that topic, so I am unqualified to give you feedback here”? It’s pretty rare for someone to come clean about their ignorance, right?

Yet we are all mostly ignorant. There are very few things that you can claim to have expertise over. In Malcolm Gladwell’s book Outliers he talks about the 10,000 hour rule, which suggests that someone needs to be engaged in an activity for the equivalent of five years’ full time work before they can consider themselves to be an ‘expert’. How many of your advisors can make this claim?

When I wanted to go into business for myself, who do you think gave me feedback? Was it trained business advisors, successful entrepreneurs and CEOs? No. It was my mates who’d never owned businesses before, and therefore had no idea what they were talking about. This didn’t stop them telling me exactly how they think I should go about things. Even worse, a number of them told me that it was too hard and that I shouldn’t bother!

All of these people have one thing in common: they were unqualified to give me advice and yet sounded sure of themselves. They were not successful in the areas they gave me advice on, they were inexperienced in those areas, and in many cases they were actively failing in those areas without any sign of progress.

Yet they were the loudest voices.

The same will often be true for you. Those most likely to give you unhelpful advice and feedback are often the ones who speak up first. While the real experts wait patiently for you to ask, the ignorant masses will jump the queue and start rationalising their fucked up ideas, filling your mind with garbage. Worst of all, they’re actually trying to help!

What they don’t realise, or should I say, refuse to admit to themselves, is that they’re not really trying to help YOU. Whatever it is that you have done or suggested has triggered insecurity in them. They feel a strong desire to give you advice, and they rationalise to themselves that this is for your benefit. It’s not!

What they are really trying to do is remove or reduce their own guilt.

When you suggest to a lifetime employee that you want to start a business, you may remind them that they see themselves as a wage-slave. If they feel ashamed of this, they will feel frustration rather than see you as an inspiration, as if you are the reason for their sudden wave of guilt. This will quickly be followed by a strong compulsion to make that guilt go away.

And how can they do that? By confirming that their decision to remain a wage-slave is the only option. This way they don’t have to accept responsibility for their decisions. The easiest way to release their responsibility is to successfully convince you of their belief. If they can achieve this, then they have all the evidence they need to remove their guilt. “See, I have to be an employee forever because now Dan agrees with me that it’s too hard to start a business”.

Some people will give you advice because they are attached to an identity that relates to being an ‘expert’. Often this is a vague overall thing, where they cannot accept the fact that they don’t know shit. Because their brain has complex ideas about how everything should be done, they assume those ideas are also accurate. They simply cannot conceptualise the possibility that their brain could have ideas which are incorrect, because their brain rationalises these ideas.

I believe this comes from fears we are raised with, particularly in school, where getting the answer “wrong” leads to punishment and public humiliation. In school, rather than being encouraged to make mistakes, we are shamed for them. Some people are unable to face this, so will never accept being wrong, as they lack the courage to face shame.

In real life this translates to them becoming a know-it-all who cannot resist giving an answer, regardless of lack of experience, knowledge and research. Considering most of us went through the same basic schooling structure with the same ideology around punishing mistakes, many of us have this tendency to believe we know the answers. This is why I say “everyone” is full of shit. I’m not being judgmental because I have this problem too. I find it really difficult to resist giving an answer to someone’s question, even though I know in reality they will often know what’s best for them better than I ever could.

Others, like parents, are so afraid for your safety that they will discourage you by default (which is more about their insecurity than your safety). Everything unfamiliar is seen as dangerous by them, so they assume everything new must be avoided. Change is terrifying to these people, so the mere suggestion of it fills them with dread. They translate this feeling as “caring for you”.

So what do we do about all of this?

Let’s review the key points here. Firstly, very few people will be experts in the area you are interested in developing. Secondly, those who give you unsolicited advice are the least likely to know what they are talking about. Thirdly, ignorant people don’t believe they’re ignorant, so they will sound sure of themselves. Fourthly, we live in an age where most people are unconsciously manipulated by mass garbage (think about how many people believe articles they read on the internet).

Based on these factors, here are some tips on how you can manage the influences in your life:

Last point I want to make, is that right now I am telling you how to live. So if you read this article thinking “good points Dan, this is SO true, and my, how handsome you are!” then you are simply believing something you read on the internet. I challenge you to TEST what I am saying. Don’t just believe me because I seem sure of myself.

I know I’ve tested these ideas extensively, but you don’t know that. Go find out for yourself.