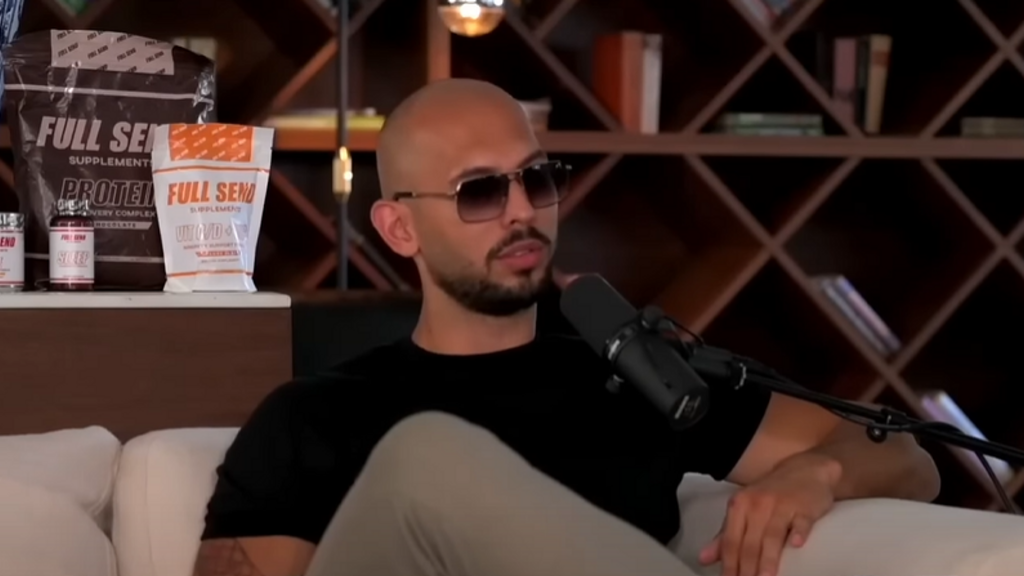 It’s past time to reveal the truth about Andrew Tate – who he is, what his intentions are, and the threat he represents.

But I was initially reluctant to create any content about Tate, for a couple of reasons.

Firstly, I just personally dislike doing what everyone else is doing – my ego is repulsed by the idea of conforming and following trends, and everyone is currently riding Tate’s popularity/notoriety for their own clicks and exposure. Lame.

But more importantly, the second reason is that I’d be feeding the Tate Marketing Machine, which is exactly what he wants. He is the living embodiment of “there’s no such thing as bad publicity”. Tate has perfected the marketing technique of turning all critique, both positive and negative, into dollars in his pocket.

But then a Brojo member asked me to comment on whether Tate represents the Brojo values of integrity and whether he’s a role model for masculine confidence, and I realized that if I don’t say something then the men who follow my work might end up modeling Tate for all the wrong reasons.

So I’ve swallowed my ego to write this piece.

(Note that I’ve provided some sources for factual claims I’ve made about him, just click the links where you see them.)

Who is Andrew Tate and why is everyone talking about him?

I’m going to assume you know who Andrew Tate is, and for that reason I won’t give you too much background.

The basics are that he is a champion kick-boxer who went on to notoriety after featuring on a reality TV show, and has since become a kind of online superstar best known for his controversial statements and misogynistic stance on women, his incredible wealth and materialistic lifestyle, and his overall sheer prolificacy.

Like the Kardashians, Tate’s somehow achieved the bizarre result of being famous for being famous.

All of Tate’s online content – a great majority of which is created and shared by people other than himself, which we’ll get to in a minute – leads eventually to a single location: The Hustle University.

This is an online learning platform created by Tate, teaching a range of topics mostly in the wealth-building and entrepreneurial space. There is a subscription-based membership, and if numbers are to be believed Hustle University earns Tate millions of dollars per year with very little active effort on his part.

A key element to the training in this “university” is that his students are strongly encouraged to create success online by riding Tate’s coattails. The reason we are hearing so much about Tate is because every person enrolled in his courses is being actively pushed to create, share and publish more content about him. His students literally pay to do his marketing for him.

And the rich keep getting richer. Tate is one of the few people who has understood how to deliberately “go viral” – the secret being the marketing concept of social proof, whereby you’re more likely to view content about him simply because it seems like everyone else is.

Tate manufactured the appearance of being viral until it became a reality, and now it’s become a self-sustaining exponential growth curve due to the human inability to resist commenting on something that’s popular (as I am currently doing right now, dammit!). Tate now knows that he only needs to provide new controversial content on a regular basis to keep the fire stoked.

What are Tate’s motives?

Some – many, actually – believe he is simply a narcissistic bigot who likes to run his mouth, a kind of younger, physically fit Trump who gets off on creating a stir.

His supporters will tell you that Tate is on a mission to get certain truths out into the world, and to shake up the “woke” conspiracy that threatens to control us all.

Others think it’s a carefully crafted performance designed to get him as much attention as possible to feed his ego.

And a few think it’s unintentional; that other people commenting on him is the main reason he’s become a big deal.

But personally, I don’t think anyone has seen the exact strategy that Tate is employing… except for me because I have a huge ego and always think I’m right. But seriously, there is a method to his madness, and the only reason I see it is because I’m intimately familiar with his secret target audience: the manosphere.

More specifically, Tate’s content and Hustle University are intimately linked through a carefully crafted and deviously clever campaign to exploit a marketing niche that very few people have had the insight to see as highly profitable: the Red Pill Community.

For those of you not familiar with it, the Red Pill community is an unofficial collection of mostly men within the realm of what is known as “the manosphere”.

It began as a collection of Men’s Rights Advocates, self help and dating gurus, and similarly-minded individuals and groups, and has since become a massive quasi-organised online community of men with a shared philosophy, interests and beliefs.

Among the things they believe are two prominent ideas:

Firstly, that most people are “in the Matrix”, meaning that nearly everyone are the unenlightened slaves of an oppressive system that holds them down for the benefit of a dangerous class of people. More specifically, this is a conspiracy theory about the “feminization of the West”, and refers to leftist political ideologies, feminists and the like. In other words, “taking the red pill” is about escaping this Matrix.

Secondly, and related to the first point, the idea that men specifically are getting a raw deal, and that this is due to evolutionary psychological memes about women being destructive, dominating, and cruel. There is a strong misogynistic streak throughout the Red Pill narrative, either directly stated or implied through the constant focus on how men are superior (or should be).

Frankly speaking, a large portion of this indefinable audience is made up of bitter, resentful, and beaten men who are looking for answers to the recurring issues they have in their careers and love-lives, and are desperate for quick-fixes and someone else to blame.

There are exceptions, but how this relates to Tate is about the niche within the Red Pill of these types of men.

The exploitation of broken men

Tate willingly provokes others into calling him things like “The King of Toxic Masculinity” because he knows this is a badge of honor in the Red Pill community, who believe this term – though originally coined by the manosphere itself – is a derogatory attack on men who are simply speaking the truth.

Tate regularly rags on women and alludes to treating them poorly or even outright assaulting them. This is because he knows that a large portion of the Red Pill men are bitter towards women and blame women for their own suffering, so will automatically hunt for content that validates this narrative, which has a strong viral algorithm on YouTube.

Tate regularly provokes and battles with influential people that have left-leaning politics, while is collusive and agreeable with influential conservatives, knowing that the Red Pill community is almost uniformly anti-Left.

Tate plays up his “Dark Triad Traits”, namely the more aggressive and violent elements of his personality, by constantly referring to his kick-boxing expertise and talking about violence, dominance of women, and bullying “nerds”. These traits are worshiped by the Red Pill community, as they believe such qualities are both attractive to women and respected by men.

Tate’s subscription service is fairly affordable (at last check it was $50 USD per month). This is because Red Pill guys tend to be doing not so well financially, so if you want to target them you need something cheaper that promises high return on investment.

If you look at everything Tate does from a high level, rather than getting bogged down on any one particularly controversial or insightful thing he’s said, you’ll see an overall strategy: to attract and capture Red Pillers’ attention and admiration, draw them into his sales funnel, and then take their money with high-pressure “contrapraneur” sales techniques, promising them an end to their pain, firstly through financial gain which leads to an end of their sexual pain.

Is he authentic though?

Honestly, I just don’t know how much of it is really “him”.

I suspect that he’s played to his strengths and used elements of his true personality and beliefs to his benefit – it would simply be too much work to completely act this all out and be so consistent with the narrative.

However, “authenticity” implies an absence of strategy: a transparency and spontaneity that gives little thought toward results and long-term dominance. And Tate is definitely employing a strategy.

Even though parts of this playbook are “really him”, they are still deliberately being selected and employed in the overall strategy of signing people up to his Hustle University to make money while simultaneously building his reputation as the Bad Guy Who Tells The Hard Truths (or whatever grandiose image he has of himself).

Tate’s goals seem pretty simple: get rich and famous and powerful. The basic drives of any psychopathic personality.

Tate has employed these strengths to their utmost, ironically exploiting the very people who have chosen him as their champion: the Red Pillers.

I have a lot of sympathy for the Red Pill dudes. Many of them come from pain and misery, and have banded together out of desperation, rage, and hope for a brighter future. Tate has twisted the knife to squeeze both cash and validation out of them, as if they haven’t lost enough already. And the sad part is that they love him for it.

From what I’ve seen, Hustle University is largely a scam, in that equally valuable content can be found for free on YouTube and other platforms. There is nothing original or of particular value there that is worth $50 a month.

So in summary, Andrew Tate is a highly successful marketing fraudster, doing the same old schtick as every other scammy cunt who came before him, but just doing it a lot better than most. It probably helps that he’s entertaining and emotionally provocative, employing a keep-em-guessing approach similar to the one that ensured Donald Trump’s successful presidential bid.

I’m sure that in time Tate will fall, as have nearly all the others before him. But before that happens, he will have gathered thousands or even millions of misguided lemmings, following him over the edge of the cliff.

I write this post with regret for further promoting his name but in hope that I might break the illusion of Andrew Tate’s self-created legend, and help steer some men in need of guidance away from a snake pretending to be an emperor.

Tate is not your role-model. Go find an ancient philosophy to follow, like Stoicism or Taoism, or get some masculine mentors or coaches who promote more humble methods of building confidence.

Final note: Unlike most of Tate’s detractors, I don’t have a moral issue with him. I don’t really care that there are “bad” people in the world because that’s just the way of life. I even kind of admire his skills! I’m not battling against him because he’s a “bad man”; I’m speaking out because I care about the kind of men who follow him and I only want the best for them, and he’s simply not it.