5 Steps For Controlling Your Self Beliefs

Most of the work I do with clients is around their beliefs.

This is because I have come to understand that the true keys to success in all areas of life will ultimately flow from their belief systems, as will their failures. In this article I would like to talk about belief systems.

I want to try to explain just how important it is for anyone dreaming of success to make a conscious effort to explore their beliefs. In fact, exploration is just the first step. If you wish to be successful in any aspect of life you would do well to learn how to take control of your brain’s system of developing and maintaining beliefs.

What are beliefs, really?

Well, they seem a pretty straightforward concept when you write it down (though much more complex when discussing a real belief with a client). The simplest way I can describe a belief is:

An ingrained thought pattern or script controlling your decisions and actions, which resides in your subconscious and is connected to consistent emotional reactions.

Of course it’s not quite that simple, however the main key elements relative to success are there.

In a crudely basic description, beliefs start with a combination of thoughts and emotions in reaction to some external stimulation. The brain, being lazy, then looks for confirmation that this is true (in general most people’s brains look for confirmation rather than contrary evidence). When the brain finds more evidence, the thought pattern and related emotions are repeated. This keeps happening and each time the brain becomes more convinced that this is reality.

So let’s look at the steps for controlling these ingrained patterns.

Step one: Accept that you can believe anything

Famous Greek philosopher Socrates once said “the only thing we know for certain is that we know nothing”, or something to that extent (I’m paraphrasing here). The point is simply we do not know anything for sure. Regardless of your current thoughts on science, religion or other core value systems, it is impossible by definition to actually disprove anything to a 100% certainty.

For example, let’s say I believe that our universe is simply the imagination of some other amazing creature; that we are all just part of this creature’s dream, and when it awakes we all disappear. Or what if I believed that the world is simply The Matrix, we are all logged into computers and having fake thoughts to keep us under control.

I don’t actually believe these things by the way! The reason I bring up these examples is to challenge any of you to completely disprove them. It’s not possible to disprove them, therefore there must be at least some marginal, tiny likelihood that they could be true.

I am not promoting pseudoscience here by the way. There is a type of bias people are afflicted by when they believe in something simply because it cannot be disproved. That’s not the point I’m trying to make. I am simply showing you that because nothing can be disproved, there are infinite options of what you could believe in. This doesn’t mean that you have to believe in any particular thing, or change your current beliefs, but surely you must accept that you cannot completely disprove other peoples’ beliefs.

This lays the groundwork for Step Two…

Step two: Accept that your beliefs are under your control

OK, when you’re a clueless child growing up you have no real concept of what beliefs are. To a child, their beliefs are reality, not even questioned until the brain does some significant development and opens the door for the child to think critically.

However, before this can even happen some very strong beliefs are already sealed in the child’s mind-vault. For example, many adults believe that carrots improve your eyesight at night and tell this to their children. If you believe this, try researching evidence to support it, you’ll be amazed at where this little myth comes from!

Now let’s say you believed in Santa as a child. Then as you grow older you started to question the reality of Santa: the massive trip around the world in one night to every single home; carrying enough presents for millions of children in on sleigh; giving the rich children nicer gifts; staying awake that late at his age etc etc.

At some point in time, usually long before your parents break the news, you chose to stop believing in Santa. It just didn’t line up with your view of the world and the evidence you’d put together.

The key point I’m trying to make here is that with conscious efforts you can change from believing in something completely to not believing in it at all. Another good example could be someone who gets brain-washed into believing a cult’s fantastical ideals, and then over time becomes disillusioned with the cult and leaves. Years later, that person believes in none of the cult’s ideals anymore, because they didn’t like the way those beliefs affected their life. 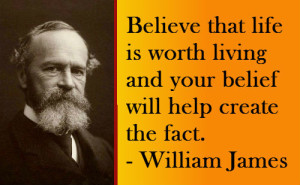 Step three: Accept that your beliefs control your behaviour

Whatever it is that you believe in, regarding all the various aspects of life and beliefs about yourself, will ultimately determine how you will behave. In simple terms, if you have negative beliefs, then your thoughts will be negative, which makes you feel bad, which combined causes you to do negative things. For example, if you believe that people of a certain ethnicity are bad, you will think hateful things when you encounter these people. This will make you feel angry, frightened or upset. You then might lash out at one of them for no obvious reason.

Alternatively, positive belief systems have the same but opposite effect. For example, if you believe you are the best person on the planet, you will think that you are capable of anything that anyone else can do. This will make you feel confident, competitive and enthusiastic. You will then behave accordingly; seeking to improve your life, achieving goals, overcoming fears, and so on.

Test this on yourself: write down a certain belief which you are aware you have. It can be something simple, like what food is best to eat, which type of person is most attractive, how people should spend or save their money. Then write out your thoughts on this topic. Take those thoughts and write out how each of them makes you feel. Then link that thought-emotion combination to how you would likely behave in certain situations relevant to that belief.

For more on how you can control your beliefs, check out this post I wrote about negative self beliefs.

Step four: Identify which beliefs are helpful vs. unhelpful

Take the time to write down all the beliefs you have about yourself and your ability to succeed. You don’t have to get this perfect, just to try to clearly state which beliefs influence your behaviour regarding your goals and success. You could come up with all sorts of positive things, like “I like to try new things”, or “I’m always willing to change to improve my life”.

What you should also see is some more negatively skewed beliefs. They usually start with “I can’t…” or “I’m afraid of…” These are what I call unhelpful or limiting beliefs. Why? Because if you want to succeed they will not help you, simple as that. Positive or helpful beliefs will drive you to succeed and get you through the challenges. Unhelpful beliefs are the ones that slow you down or stop you completely, sabotaging your efforts and taking the fun out of self-development.

This is actually quite an in-depth process that requires planning, hard work, and conscious efforts at controlling your thoughts and behaviour. It can take months of work to “reframe” limiting beliefs. I won’t go through it all here, but the core aspects are:

This article on changing your state of mind can really help you with this.

I hope this process helps some you identify and eliminate some of those outdated limiting beliefs. I guarantee that if you can control your belief system you will succeed in anything you wish to succeed in. If you don’t believe that, then try controlling your belief system so that you can!

Subscribe today to get tonnes of free career and lifestyle resources, and a copy of my popular ebook:

“The Perfect Job”
Make a Career Breakthrough and Find Your Purpose by the end of the day!